Blog: The Isle of Man – A foodie’s paradise

Here on the Isle of Man we love our food, and we have some great local delicacies and specialities that you’ll only find when visiting our beautiful island.

The Manx Queenie is a type of scallop that we love here. As an island, seafood is a big part of our identity and nothing symbolises that more than the Queenie, sweet and delicate in flavour.

There are many different suppliers, such as Island Shellfish, who make sure Queenies can be eaten throughout the year, so that whenever you visit the Isle of Man you won’t miss out on them! 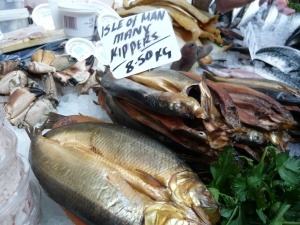 It may sound bizarre to some, but chips, cheese and gravy is a dish so loved here on the island that there have been calls to have a national day celebrating the dish. Walk in to any takeaway, such as Bourne Plaice or Ramsey Trawlerman in the north of the island, and order a portion for yourself – you won’t regret it!

This breed of sheep is specific to the island and a is a very unusual one. Many believe it was the Vikings who brought them to the Isle of Man, which makes sense given their prominent horns.

Loaghtan lamb has a very intense flavour which you can taste at many a pub or restaurant on the island. Or, if you visit us in September, you may be able to enjoy it at the Isle of Man Food and Drink Festival!

Kippers and the Isle of Man go hand-in-hand. Renowned the world over for their smoky, rich flavour, they’ve been traditionally cured here on the island for well over 100 years. Delicious on their own for breakfast, or perhaps in a kipper sandwich. You simply can’t visit the island […]

Blog: Things to do with the kids on the Isle of Man

Things to do with the kids on the Isle of Man

With the summer holidays just around the corner, there’s no better time to plan a getaway with the kids, and the Isle of Man has so much to offer. Here are our top suggestions for family fun on the Isle of Man, whatever the weather!

Things to do outdoors on the Isle of Man

If you love getting outdoors, you’ll love the Isle of Man with it stunning scenery, hidden glens, long stretching beaches and more.

Burn off some energy at Glen Wyllinn park, just down the road from our Fuchsias cottage on the west coast of the island. A little further afield is The Curraghs Wildlife Park which has penguins, meerkats and many more animals for your family to see and even feed!

A little further north, you can try your hand at kayaking at Mooragh Park in Ramsey or take advantage of the countless children’s play areas in parks around the Island.

We also have 18 national glens, such as Bishopscourt Glen – a magical glen with its own secret cave! Explore our glens and why not take along a picnic, too?

If you have a taste for heights then head up Snaefell, the island’s only mountain. It is said that on a clear day you can see seven kingdoms from the top. These are England, Ireland, Scotland and Wales, along with the Isle of Man itself, the sea and heaven.

And by virtue of being an island, we are surrounded by sandy beaches! These natural playground are the perfect location for family fun, whether it’s sunny sandcastle building or enjoying the view of the epic Irish Sea in less fair weather.

Things to do indoors on the Isle of Man

Blog: Hidden gems on the Isle of Man

Hidden gems on the Isle of Man

The Isle of Man is known the world-over for its road racing and its cats with no tails, but dig a little deeper and our picturesque island is home to some little-known gems known only to locals and those who venture off the beaten track.

Here, we’ll share a few of our favourite secret places with you, so next time you visit the Isle of Man, you can take a look and experience them for yourself.

Hidden down a long and winding lane, Cornaa Beach is a sheltered cove looking out across the Irish Sea. The pebble beach gently slopes down into water so clear it’ll take your breath away.

Follow the public footpath through the glen, alongside the stream that leads to the sea, and you’ll come to a hidden lagoon nestled among the trees, perfect for a paddle or – if you’re feeling brave – a swim!

It’s a little known fact that the Isle of Man has its own native wallaby population and, if you venture out into the Curraghs – a vast expanse of wetlands in the north of the island – you’re likely to spot one or two for yourself.

Follow the winding footpaths through the marshland, near Ballaugh, and keep your eyes peeled for our furry friends from down under.

But remember, dogs are not permitted in this area and walking boots are advised.

Located on the western coast of the Isle of Man, Niarbyl Bay is a secluded beauty spot with some of the most beautiful views on the island. Grab a cream tea or a heartwarming bowl of fish chowder in the café and wander down to the beach, where you’ll find quaint thatched cottages.

Head up over the dramatic coastal path and you’ll find […]

Blog: Five reasons why the Isle of Man should be your next holiday destination

The Isle of Man is a match made in heaven for those seeking rest and relaxation or an active walking or cycling holiday in the great outdoors. Here at Isle of Man Holiday Cottages, we love nothing more than to see our guests exploring and discovering what the island has to offer.

If you’ve never visited, you’ll be amazed by what there is to see, do and experience here. So, we’ve rounded up our five top reasons why you should make the Isle of Man your next holiday destination

With its rolling green hills, dramatic coastline and quaint towns and villages, the Isle of Man is home to awe-inspiring scenery 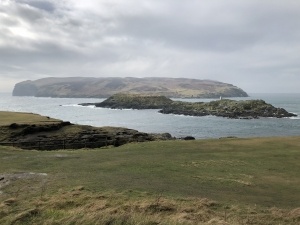 that provides countless photo opportunities. Whether it’s a vibrant sunset in Peel, a blustery day at the Ayres in the north of the island, or a panoramic view over Port Erin bay at the height of summer, you’ll be blown away by the stunning views and vistas the Isle of Man has to offer.

Did you know the Isle of Man has the highest concentration of dark sky sites in the British Isles? On a clear night you can see the Milky Way and more. The Northern Lights are even visible from the north-eastern coast, too, where our East Ballabane Farmhouse and Milking Parlour cottages are located.

Forget bustling crowds and lengthy queues, here on the Isle of Man you can enjoy total peace and quiet, with an array of hidden coves and open countryside to enjoy. Walk for miles along the island’s coastline with only the […]